To be sure - as a foster parent, you learn to be flexible. Like yesterday, when our worker called to let me know that she had sent me the phone number so that I could call in to participate in X-man's case plan meeting - in half an hour, and that his visit is canceled, but would be taking place today from 3:00-5:00. Like I said-flexibility.
His case plan meeting was fairly typical, slightly informative, slightly frustrating. Nothing huge is changing in his case as of now. Mom seems to be doing everything that they have asked her to do - but it is not evident if this participation is in hopes of getting the boys, or in hopes of staying out of prison. This case was just so severe. In most cases I am able to empathize with the parents to some capacity, and support them in their efforts towards reunification. In this case - I'm really struggling, and mostly I just think they need to be in jail. Partly to prevent them from ever, ever doing anything so terrible again - partly because of feelings of retribution that I'm still working through, prayers will be needed.
Today is X's visit with his brothers and his mom. If charges go through on February 18th like they are supposed to, after this visit he will most likely only see his mother one more time - ever. Really, I think this is best for the boys. And still, (even with said feelings of retribution) that just seems so huge....and sad....for the boys and for their mother.

We had our foster parent support group meeting last night. The topic was health department standards and regulations on foster homes. Not one of my favorite parts of fostering. (or....I hate this part of fostering.) It kind of seems like the list of rules just gets longer and longer, but our agency is really awesome - so it's not so bad. We just got done re-licensing for the year, and it was about .0001% as difficult as initially getting licensed. Questions about licensing? Send 'em my way.

Since this was kind of a downer post....I'll end with a few pictures of the cutest kids ever. Biased I am not. ...Off to X-man's Visit! 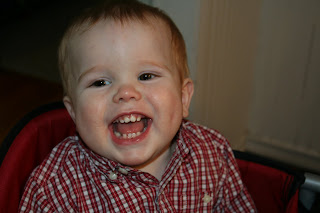 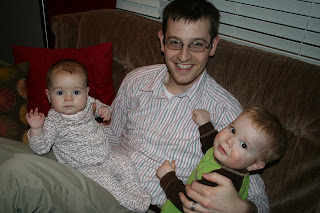 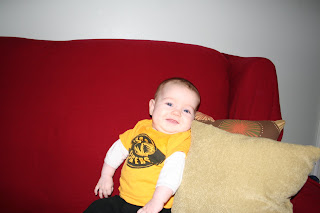 Sylvia sporting her Mizzou gear. If it were up to Brian we'd sing her the fight song every night before bed. ha!
written by Maggie at 1:24 PM